Some five million Americans have a hernia, a protrusion of an organ or tissue through a weak spot in the abdomen or groin, according to the National Center for Health Statistics.

Traditionally, open hernia-repair surgery involved stitching a mesh patch, or surrounding tissue, in place over the weak tissue. Today, many hernias are repaired laparoscopically, which is less invasive. Because suturing through tiny laparoscopic incisions is difficult, most surgeons use a less ideal solution — screw-like tacks to secure the mesh to the abdominal wall or bone.

“So we invented a way to deliver suturing in a minimally invasive way. It potentially reduces scar tissue and enables a strong connection of mesh to tissue,” says Lena Levin, cofounder and CFO of Via Surgical in Amirim, Israel.

Via Surgical’s unique FasTouch cartridge system affixes prosthetic material to soft tissue. It is designed like sutures and delivered like tacks, with the goal of providing the best of both worlds for laparoscopic hernia repair.

The FasTouch system has the potential to cause fewer complications, less postoperative pain and faster recovery, as well as be more cost-effective for the hospital. 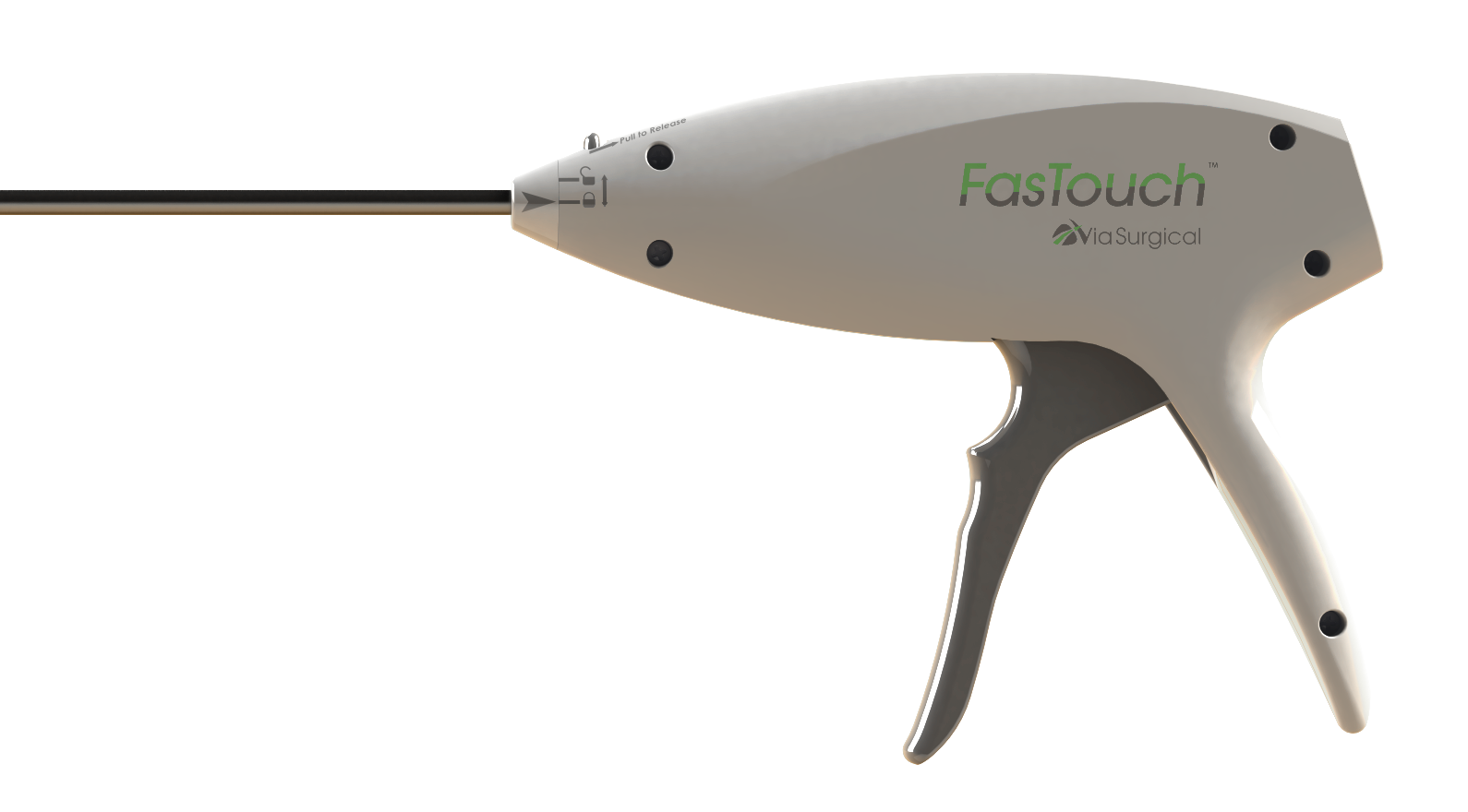 The FasTouch system for hernia repair. Photo courtesy of Via Surgical

Surgeons are excited about it

On May 8, the first batch of FasTouch devices was shipped from the Israeli manufacturing facility for distribution across the United States by Progressive Medical.

“Surgeons are very excited about it,” says Levin. “Hernia repair is one of the most common surgeries.”

Approximately 1 million of these surgeries are performed annually in the US alone, about half of them laparoscopically.

“We need a device that allows us to fixate the mesh to the abdominal wall without causing chronic pain,” said Via Surgical Medical Advisory Board member Dr. Brian Jacob, associate clinical professor of surgery at Icahn School of Medicine at Mount Sinai Medical Center in New York and founder of the International Hernia Collaboration.

FasTouch is “very low profile … and it allows us to place a suture through the mesh into the fascia with the simple application of a tacking device. Frankly, it’s amazing we haven’t seen this before,” Jacob said.

“Using the FasTouch was exciting and it was very easy to use laparoscopically,” added Dr. Amy Banks-Venegoni, assistant professor of surgery at Tufts University Medical School, who participated in the preclinical study. “It didn’t require the counter-tension that you [ordinarily] need to put on the abdominal wall.”

FasTouch was cleared by the US Food and Drug Administration in 2016.

The device was invented by Levin and her two cofounders, Ofek Levin and Arik Levy. The same trio previously founded and led PolyTouch Medical, where they developed an advanced mesh-positioning device for greater accuracy and shorter procedure time in hernia repair. That company was sold to Covidien in 2011.

“We three have been working together since university, and we continued working together after we sold our first company, as we recognized a new need: Surgery was becoming less invasive but the tools were remaining the same,” Levin tells ISRAEL21c.

Last year, Via Surgical raised $6 million in a funding round led by Benslie Investment Group.

In addition to the three founders, the company has nine employees and a marketing office in Boston.