Sniffing out diseases with the Nanose

Developed in Israel, the Nanose device analyzes breath in order to detect diseases such as cancer and Parkinson’s, even in their earliest stages. 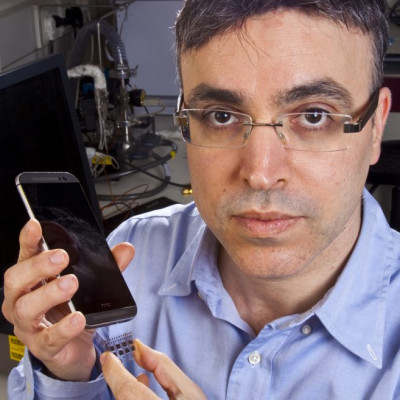 If there is such a thing as a science superstar, it might be Hossam Haick, Professor of Chemical Engineering and Nanotechnology, Technion-Israel Institute of Technology.

Born and raised in Nazareth, he left Israel after receiving his Ph.D. to study in the United States for a few years, then returned to the Technion, where he is currently a professor of chemical engineering and nanotechnology.

Haick has been working on what he calls the Nanose since 2007. This remarkable device is designed to “sniff out” cancer and other diseases, including Parkinson’s, Alzheimer’s, gastric ailments, and more.

Haick is a respected and successful scientific researcher who has received major scientific awards from all over the world, and has managed to raise huge sums of money in support of his work. (“You can do nothing without funding!” he says.)

See our interview with him, below:

“We know that disease has a pattern of molecules in the breath. If you can detect these molecules, then you can associate them with a given disease. Dogs have a very sophisticated olfactory system; it’s 10,000 times more sensitive than ours. The Nanose started out as an idea to try to imitate the olfactory system of the dog – exactly on the same principles – and to make real-world applications with it. One of these applications is to smell disease through the breath.

“In our lab, we take the two main parts of the dog’s olfactory system, the receptors and the brain, and try to imitate them in an electrical way, using nanotechnology. The ultimate device is known as the Nano-Artificial Nose—the Nanose.

“By analyzing breath we can discriminate between different types of lung cancer, early stage from late, and most important, the benign from the malignant.”

“Initially, in clinical studies, we had success detecting advanced-stage lung cancer, and we published our findings. But very soon we realized that the most important application of this technology is early-stage detection – before the patient himself or herself is feeling the disease, which is usually not until the advanced stages. And even further: if you can predict whether a healthy person is at high risk to get cancer, you can begin taking preventive measures. So right now, we are working on detecting, with exhaled breath, whether a person is at risk to have cancer in the future.

“Some advantages of our technology are that it’s portable, noninvasive, and faster than the CT scan. We can detect cancer even before you can see it in the CT. Moreover, by analyzing breath we can discriminate between different types of lung cancer, early stage from late, and most important, the benign from the malignant. And we can do it with a very high accuracy rate.

“Ultimately, we want our device to be easy to use. In 20 years, we hope to have a device that is portable or can be integrated with a smartphone. And it should work. But the most critical part of this project is cost. So we are working hard to make the device inexpensive; we hope to bring it to the order of a few hundred dollars. Then it can be provided not only to hospitals but to family doctors and pharmacies where the tests can be part of routine examinations.

“There are a lot of risks in this project. Inventive projects usually are risky. But we are taking these risky steps without going against the stream—and we are able to show results. We are advancing good science, which can help society.”

Lin Arison & Diana C. Stoll are the creators of The Desert and the Cities Sing: Discovering Today’s Israel, a treasure box that highlights Israel’s creative achievement and innovation.