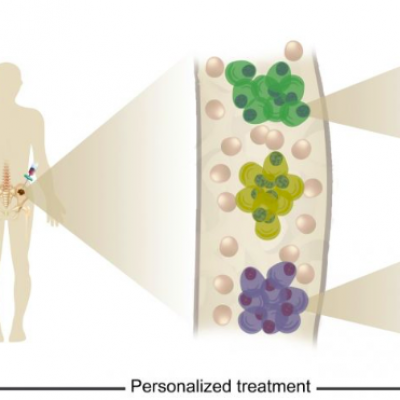 Israeli researchers have developed a new technology that profiles the genetic makeup of cancerous cells, allowing for better diagnosis and treatment.

Multiple myeloma is the second most-common type of blood cancer. Multiple myeloma occurs when plasma cells in the bone marrow – the cells that produce antibodies – proliferate out of control and lead to organ failure and death.

A major stumbling block in diagnosing myeloma is that each patient is unique and current blood tests are incapable of identifying early disease onset and classifying which patient should receive which treatment.

This is the problem researchers from the Weizmann Institute of Science and clinicians from Israeli hospitals wished to solve.

Using machine-learning approaches to automatically identify malignant cells out of tens of thousands of cells, their method sequences the RNA in thousands of individual cells from patients’ blood or bone marrow, capturing the specific gene program that is active in each individual cell.

Their research, recently published in Nature Medicine, found that while the plasma cells of healthy individuals are similar to each other, myeloma cancer cells are extremely heterogeneous.

This makes it possible to identify even a small number of malignant cells in the blood at an early, pre-cancer stage, allowing for more precise diagnosis and the ability to make better-informed choices about treatment.

In the future, the discovery might help multiple myeloma patients receive earlier and more precise treatments, avoid relapses and be monitored with blood tests that are far less painful than today’s painful bone marrow biopsies.

“We are entering an era in which measuring big data and using machine learning will provide clinicians new insights and understanding into devastating diseases like multiple myeloma,” says Dr. Assaf Weiner of the Weizmann Institute of Science’s Immunology Department.

Weiner was the lead author of the paper along with Guy Ledergor. The paper’s 33 authors are mostly Israeli, along with several scientists from New York, Arizona and Spain.