A touching story: She gave a life and received a life in the same hospital

Three years after fighting for her life due to severe kidney disease and losing her first baby, 25-year-old Lina Souad continues to smile. She has returned to Rambam Health Care Campus and become a mother. 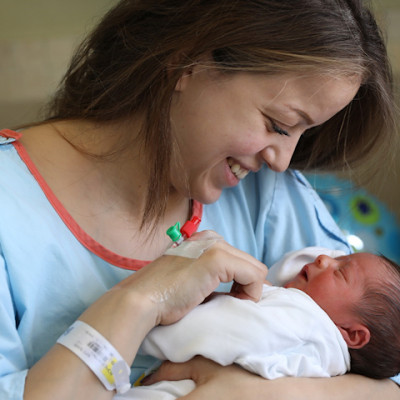 Lina Souad with her newborn

Souad married when she was 22 years-old. As planned, she conceived soon afterwards—waiting for her little girl to arrive and turn the couple into a family of three. However, plans are one thing and reality another. During the first weeks of pregnancy, she began to feel ill and medical tests revealed bad news. Souad was suffering from severe renal failure, a condition that endangers the fetus in utero, but above all endangers the mother's life. “The news affected me very badly," recalls Souad, "both physical and mentally, and the terrible news came at a time that was supposed to be joyous. My blood pressure shot up and I felt sick all the time. The doctors explained that it was best to terminate the pregnancy, but I wouldn't agree, I simply couldn't.”

Contrary to her doctors' advice, Souad continued with her pregnancy. At week 28 she went into labor and had to undergo emergency surgery. However, the premature baby girl was too small to survive and died two weeks later. Six months later, Souad returned to Rambam, this time to take care of herself. She underwent kidney transplantation, thanks to a kidney donation from her mother. Towards the end of a 10-month recovery period, Souad was once again pregnant.

“My second pregnancy was closely monitored by the staff of Rambam’s Transplantation Unit in the Department of Nephrology and Hypertension, as well as by the staff of the Mrs. Edith and Professor Dov Katz High Risk Obstetrics Unit in the Division of Obstetrics and Gynecology,” says Souad. “This time, it felt right and everything happened differently. Everything was normal.”

According to Dr. Ido Solt, Director of the Mrs. Edith and Professor Dov Katz High Risk Obstetrics Unit, pregnancy in a kidney transplant patient is complex but possible: “The transplanted kidney, in the pelvic area, is not located in the anatomical position of the normal kidneys. We did everything we could to protect the transplanted kidneys during the birth. In addition, we took every precaution to avoid urinary tract infections, which could endanger the transplanted kidney and pregnancy,” he explains. “Thus, in this case and to our great joy, the pregnancy ended with a healthy mother and child.”

Because of her kidney transplant, Souad gave birth by caesarean section. Within a few days she left the hospital that she has gotten to know so well in recent years—this time under happy circumstances. “We are in a different place today,” she concludes, looking at her little son with a smile. “I feel good and everything is going wonderfully. A person has to keep hoping and not be afraid, be positive and not succumb to despair. With this attitude and a supportive family, great things happen.”