A Medasense monitor and probe. Courtesy Tens of millions of inpatient surgical procedures are performed in the US every year, according to a report by the Centers for Disease Control and Prevention, the leading national public health institute of the United States. Millions of these patients become addicted to opioid medications prescribed to them following surgery. 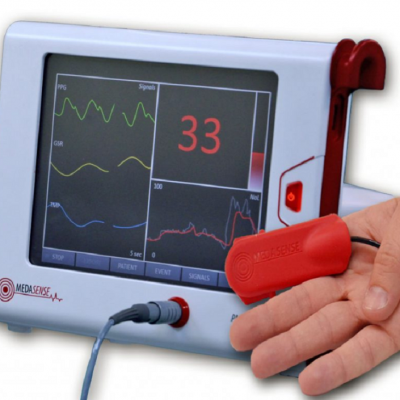 And with the opioid crisis where it is, already named the worst drug epidemic in US history and claiming around 150 lives a day in the US, health officials are desperately seeking measures to halt it from growing even more.

It could be wise for them to look to Ramat Gan, a city in the Tel Aviv District of Israel, home to one of the world’s major diamond exchanges and high-tech companies. Here, in this city of 156,277 residents, sits Medasense Biometrics, a company that has developed a patented technology platform to objectively assess the physiological response to pain (nociception), and which could ebb opioid addiction post-surgery.

This company has come up with a portable pain sensor that can tell doctors how much pain a patient is feeling and how much pain care they need. Using artificial intelligence algorithms and real-time data, the company’s easy-to-use system is already changing precision medicine, allowing for personalized and optimized pain care to ensure that the patient doesn’t get too many opioids.

“Unlike other aspects of anesthesia, there have not been good monitors of painful stimuli during surgery, and how patients react. It has thus been challenging for anesthesiologists to know how much medication is needed to blunt surgical pain in individual patients. The problem is that too much or too little pain medication (usually narcotics) can be harmful. A monitor that accurately measures how patients react to surgical pain might therefore help guide clinical care,” Dr. Daniel Sessler, the founder and director of the Outcomes Research Consortium (the world’s largest clinical anesthesia research group), tells NoCamels.

Indeed, the average rate of later opioid dependence and addiction among surgical patients hovers at 12 percent, according to a US national pain report.

“We know that the first exposure to opioids for a large number of people addicted to opioids occurs after surgery. Thus it is logical that if we have a technology that allows us to titrate opioids more carefully during surgery, we can potentially decrease the habituation to opioid analgesia that the body develops during and immediately after surgery,” Dr. Frank J. Overdyk, an anesthesiologist in Charleston, South Carolina, tells NoCamels in an email exchange.

In fact, a recent study published in a peer-reviewed American Society of Anesthesiologists journal showed a 30-percent reduction in remifentanil consumption (a potent, short-acting synthetic opioid analgesic drug that is given to patients during surgery to relieve pain and as an adjunct to an anesthetic) in procedures performed with the Israeli company’s platform.

The pain sensor tech has been part of a number of clinical studies across the world including in the US, Europe, Canada, Japan, Israel, and Chile.

“For the first time in the history of surgery and anesthesia will we have the ability to measure painful stimuli during surgery directly. Currently, we have had to use indirect measures of pain such as high heart rate, pupil dilation and sweating as signs of pain. The NOL will allow us to titrate pain medicines more precisely and early studies suggest we will be able to use less opioid pain medicine. For patients, this means fewer side effects such as nausea, vomiting, itching, constipation and inability to void,” says Overdyk.

How smiley-faces warned of the need for new pain assessment

Founder and CEO of Medasense, Galit Zuckerman-Stark grew up in operating rooms, watching her mom, a nurse, care for patients.

“I knew I was going to do something in the medical field,” she tells NoCamels.

Before founding Medasense, she led a team of algorithm engineers at Applied Materials and worked at Nokia-Siemens and Nice Systems. She also served as a consultant for several start-up companies in the field of signal and image processing.

But her days as a youngster, watching “people with those smiley faces” in the hospital, pushed her to found a company that is today set on changing the way pain assessment is done.

“Over 10 years ago, before the opioid crisis came into the headlines, the pain doctors in Israel saw it coming. It was clear there needed to be something more sophisticated to set the treatment of the patient in terms of painkillers beyond the smiley face reactions or blood pressure and heart rate levels [used to determine how much pain medication to administer],” Zuckerman-Stark tells NoCamels. “That method is subjective and also our bodies react differently. I may need 10 times more than you just because my response to medication is different. There’s a huge variance that you need to objectively know what to do.”

The company’s portable, noninvasive finger sensor, which looks just like a pulse oximeter, acquires physiological signals from four different sensors and calculates dozens of pain-related physiological parameters. This data is then analyzed by artificial intelligence algorithms and converted into a single pain index, the NOL index, where 0 = no pain and 100 = extreme pain response.

“Our competitors address the same need but without looking at a multi-parameter approach. Given the fact that pain is complex and affects many different systems in our body, and the medication given affects other systems in our body, one parameter can’t really reflect this physiological response. This is where we’re superior,” says Zuckerman-Stark.

Using the Medasense system enables physicians, in particular, critical care teams, to optimize and personalize pain treatment avoiding over or under use of pain medication.

At present, NOL is commercially available in Europe, Canada, Australia, and Israel. The company is working to enter the market in the United States.

Changes in medicine take time. Yet, Zuckerman-Stark is sure her company’s pain technology can help subside opioid addiction.
“Our next goal is being in every major hospital in Europe and getting support of the US. We are trying to help curb the opioid crisis,” says Zuckerman-Stark.