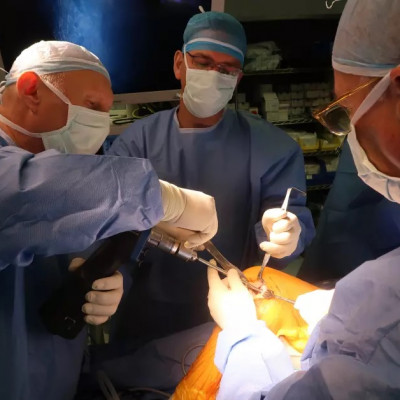 Doctors at Hadassah Hospital perform the surgery to insert Agili-C into a patient's heal.

The implant, Agili-C, was created by CartiHeal, a Kfar Saba-based startup founded by Nir Altschuler in 2009, that focuses on regenerative medicine. Agili-C, which is their flagship product, is currently undergoing clinical studies, being tested with patients around the world with their consent. Over 70 patients have been treated with the implant so far.

According to a statement from the hospital, the 30-year-old unidentified patient who received Agili-C at Hadassah had undergone multiple knee surgeries without any success. According to Dr. Adi Friedman, who performed the operation, “the transplant went smoothly, and I hope that the patient will be able to return to being fully active and to a painless life.”

Friedman indicated that the success of the surgery is a good sign for the field of knee surgery in general.

“The need for an implant that leads to the regrowth of damaged cartilage is genuinely needed in the orthopedic world, and we hope that the clinical trail will succeed,” he said in the statement, “and that the implant will be the breakthrough that we have been waiting for – for many years.”

Agili-C is a cylindrical implant made from aragonite, which a specific structure of calcium carbonate derived from coral’s exoskeleton. It is meant to regenerate damaged cartilage and bone for individuals with joint injuries, particularly in cases of lesions on the surface of knee joints.

Normally, cartilage cannot self-repair. “Basically, we are changing the paradigm” regarding knee surgery, Altschuler told The Jerusalem Post by phone. “Until now, it was known that cartilage cannot repair itself… but a small Israeli company” figured out how to solve what he called a “holy grail” of medicine.

The company ran through a few different prototypes, he said, before inventing the successful implant.

Regarding the Hadassah trial, Altschuler said that patients who consent to be a part of the study are randomly placed either in a group receiving the implant or one getting regular surgery. The first surgery in Hadassah went very well and the patient will be monitored by the clinical team. The company plans on expanding the trial to more hospitals in Israel and is already recruiting more patients.

CartiHeal hopes to gain FDA approval for commercialization of the Agili-C implant after the clinical trials are completed.