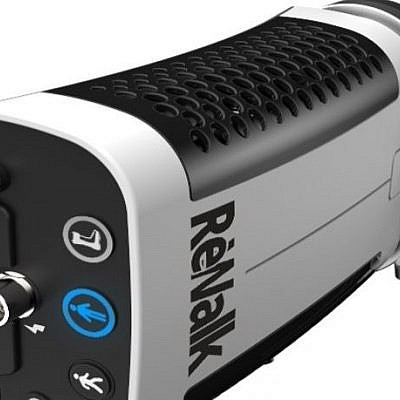 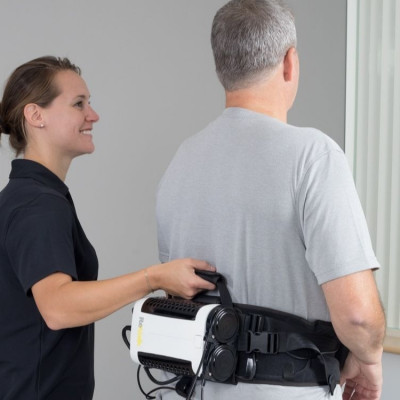 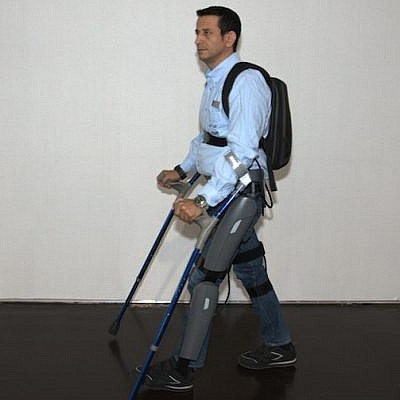 ReWalk Robotics Ltd., the Israeli developer of a robotic exoskeleton system that helps the paralyzed to walk, has started a clinical study of a new product that will aid the rehabilitation of people who have suffered a stroke.

The company said that a first study participant began using a new “soft exo-suit system,” the ReStore, which is meant to rehabilitate individuals with lower limb disability due to stroke. The patient was at the Spaulding Rehabilitation Hospital in Boston, Massachusetts, where the study is being led by a team of researchers from the Boston University College of Health and Rehabilitation Sciences: Sargent College.

The study seeks to enroll 40 participants at five of the top rehabilitation hospitals in the US, the company said in a statement last week.

“Launching the clinical study is a crucial step forward in the effort to offer the ReStore as a commercial product for the rehabilitation of stroke survivors worldwide,” said ReWalk CEO Larry Jasinski in the statement. Spaulding is a renowned rehabilitation facility, he said, and the trial will help patients access this cutting edge technology.

ReWalk Robotics Ltd. has started the clinical trial for its ReStore soft exo-suit, to help individuals with lower limb disability due to stroke (Courtesy)

The device, which was unveiled in 2017, is the second product line from ReWalk. It represents the company’s next step in its efforts to develop technologies to serve patients with various forms of lower limb disabilities. It will also allow the still loss-making company, whose shares are traded on the Nasdaq exchange, to expand its offering to a wider market — the stroke population — that that served by its ReWalk exoskeleton, which is aimed at helping paraplegics — those with spinal cord injuries — walk.

The ReStore product is less bulky and less heavy than the ReWalk frame, said Jeff Dykan, the chairman of ReWalk, in a phone interview. And it is also less expensive.

“It is not the very heavy metal structure like the ReWalk; it is soft fabric but a special fabric with cables and motors on one side,” he said. “That enables it to be much less bulky than the ReWalk for spinal cord injury and enables us to sell it at a much lower price.”

The ReStore is designed to be a versatile, cost-effective gait therapy solution for use in rehabilitation centers, and is meant to allow therapists to deliver treatment with real time analytics and adjustability. The ReStore transmits power to key joints of the legs via cables, powered with software and mechanics that are similar to the technologies used in the ReWalk exoskeleton system. The cables are connected to fabric-based designs that attach to the patient’s leg and foot, hence the name “soft suit.”

Developed jointly with the robotics institute of Harvard University in Boston, the system operates on one leg, because generally in stroke victims one side is more affected than the other. Its motors and cables are connected to a waist pack that has a computer. Physical therapists can use a tablet to set their patient’s walking plan and determine how much walking assistance the patient requires.

When the patients start walking, the cables monitor and analyze the patients’ gait, both when they raise their feet and when they lower them back onto the ground, and ensure that they walk in the correct way, by flexing or loosening the cables.

The work of the cables is similar to that of cables on a bike, Dykan said. When someone activates the hand brakes on the bike, the bike cables are flexed, and these activate the brakes on the wheels.

But the key to it all, Dykan said, “is the software. The cables and motors are analyzing every single step or part of a step that a person is doing and in just milliseconds it adjusts, to give the person as natural a walk as possible,” he said.

“The ReWalk ReStore is an innovative device with potential to alter how we treat gait impairments after stroke,” said Lou Awad, assistant professor, College of Health and Rehabilitation Sciences at Boston University, and research faculty member at Spaulding’s Stroke Research & Recovery Institute, as well as lead investigator for this study site. “We are excited to work with industry-leader ReWalk Robotics to kick off the first clinical trial of this next-generation rehabilitation technology.”

The cheaper price of the ReStore will make it easier for the company to sell its new product, when it is ready. Indeed, the steep price of the company’s first product, the ReWalk for spinal cord injuries, has hampered sales to the mass market. The ReWalk exoskeleton allows independent, controlled walking similar to that of an able-bodied person, as computers and motion sensors do the “heavy lifting.” The system controls movement using subtle changes in center of gravity, mimics natural gait and provides functional walking speed, enabling paraplegics to move independently.

To make the exoskeleton more widely available, ReWalk is trying to get medical insurance companies to reimburse patients who buy the product.

“The key for ReWalk for spinal cord injury to become a very large success… is insurance reimbursement and that takes a long time,” Dykan said.

Last month the company said that Italy’s national insurance corporation is enacting a new coverage policy to provide exoskeleton systems for all those who qualify. This followed the decision of the German statutory health insurance body to list the ReWalk 6.0 Exoskeleton System in its coverage.

The company has had “successes in Germany and in Italy and we are working on several other countries and, obviously, the big one is the US where we have been working for several years.” he said. To get reimbursement in the US, he said, “is one of the major efforts in the company.”

The ReWalk exoskeleton is one of the 15 Israeli technologies mentioned in the book “Thou Shalt Innovate: How Israeli Ingenuity Repairs the World,” which details how Israeli products are having an impact on the world.

ReWalk plans to commercialize use of the ReStore system both in Europe and the United States subject to receiving the necessary clearances to market the device both from the European authorities and the Food & Drug Administration.

The company said it plans to apply for CE and FDA clearances once clinical and laboratory testing are completed.

Once commercialized, the company will try to adapt the ReStore soft suit for other purposes, including helping patients with multiple sclerosis or Parkinson’s, said Dykan.