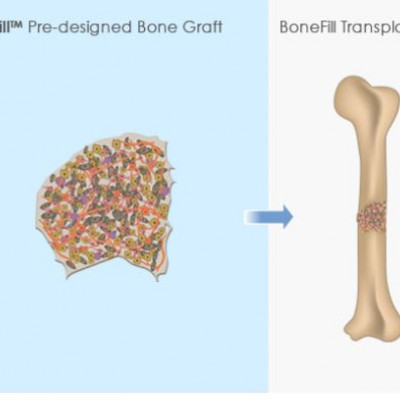 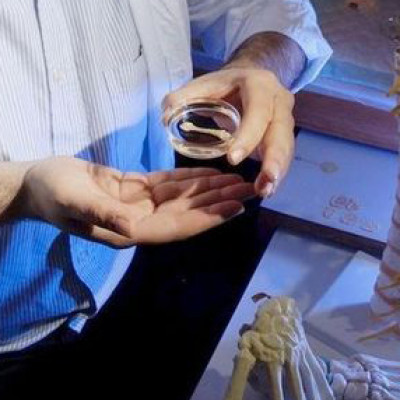 In what is said to be the first procedure of its kind in the world, doctors at Afula’s Emek Medical Center have injected a patient with lab-grown bone tissue made of the patient’s own fat cells, to replace a missing section of his shinbone that was lost in a car accident.

The mind-blowing procedure was possible thanks to a revolutionary technology called BonoFill, developed by the Haifa-based biotechnology company Bonus BioGroup. Through their groundbreaking tech, a 3D high-density bone graft can be developed from the patient’s own fat cells and regenerated in a lab, in the span of two weeks.

The patient had been missing 2 inches (5 centimeters) of his tibia due to his injuries. Dr. Nimrod Rozen, Head of Orthopedics at Emek, led the surgery in late December.

CEO Dr. Shai Meretzki tells NoCamels that Bonus BioGroup grows live human bone through an in-vitro process, in a controlled environment. The patient, who arrived with a missing area in his shinbone, which never healed, even eight months after the accident, is said to be the first person in the world to undergo this cutting-edge procedure, according to a report in Israeli newspaper Yedioth Ahronoth.

During the process, human fat tissue is extracted from the patient. Bonus BioGroup then separates the various types of cells and isolates the stem cells. The stem cells are removed and stimulated in a bioreactor, a special device that simulates the body’s environment and provides suitable conditions for bone generation. The fat cells are then grown in a lab until the tissue becomes solid, following which the hardened bone tissue is injected back into the patient’s body.

Meretzki said it will take another two months to know if the missing bone fragment was fully regenerated through the procedure.

Game changer in the field

The experimental procedure “changes the entire game in orthopedics,” Rozen told Yedioth Ahronoth when the surgery was first carried out in December. The bone transplant is part of a clinical trial that examines the safety and effectiveness of bone implantation using Bonus BioGroup’s product for the regeneration of a missing bone fragment. While the clinical trial was already in its early stages back in August 2017, it is set to continue with up to 40 patients in similar circumstances over the next three years.

“This is a better solution for the body than plastic or metal pieces,” Meretzki told NoCamels back in February 2014, when the company had first received approval to transplant in-vitro developed bone implant into humans. The first bone transplant was performed a little over two months later, in April, according to a report from NoCamels at the time. These bones are “active live bones that can grow, remodel, and change as your body does,” Meretzki said.

The National Center for Biotechnology Information reports that at least one million bone graft procedures are performed every year in the US alone, but current techniques usually require a patient to undergo two costly and painful operations to physically replace the bone with someone else’s or with a bone taken from another part of the patient’s own body. These procedures often result in problems like improper healing, further pain or complication in the area, or the body’s rejection of the bone.

A number of researchers around the world are currently developing techniques for regrowing bone using stems cells, like Bonus BioGroup, but The Telegraph has reported that in the past, most “have used a different kind of stem cell and injected them into the patient rather than growing them into bones outside the body for transplant.”

Before the shin, there was the jaw

Bonus BioGroup’s clinical trial made headlines in August when a 40-year old woman had her own regenerated fat cells injected into her arm after suffering bone loss. The procedure was also led by Rozen, who has co-founded the Institute for Bone Repair at Rambam Health Care Campus and also heads the department of orthopedics and trauma at Zvulun Medical Center in Haifa. Before the procedure, the patient had previously undergone several surgeries which had proven unsuccessful.

Prior to this clinical trial, Bonus BioGroup had undertaken another clinical trial based on 11 patients where bone tissue grown from stem cells were injected into each patient’s jaw to repair missing bone. In this study, the bones successfully merged with existing bones after hardening, the company reported.

“I’m very pleased,” Naomi Rubin, a patient that underwent jaw implantation, said. “I can chew where the new bone is, I can smile, and I’m not restricted.”

While Bonus BioGroup’s breakthrough technology will not hit the market for at least three years, the cutting-edge procedure has pushed the company’s market cap up at least 15 percent to 400 million shekels (about $116 million), Globes reported last month.

While the biotech firm still has no revenue, Globes notes that its potential market is very large.

According to the report, the company was founded in 2008 said it is planning a NASDAQ offering.