The future of cancer treatments rests also on the shoulders of Natural Killer cells, according to a recent study conducted by Israeli Professor Angel Porgador, of the Shraga Segal Department of Microbiology, Immunology and Genetics, Faculty of Health Sciences, Ben-Gurion University, and the National Institute of Biotechnology in the Negev (NIBN). 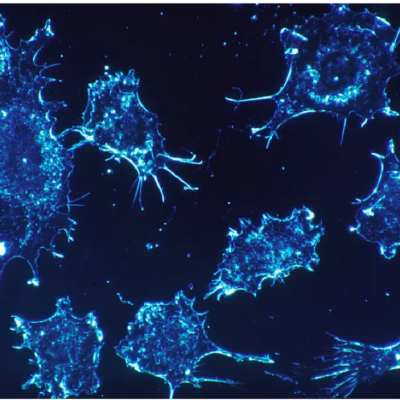 The study, published in the July issue of Cancer Immunology Research, described Porgador’s discovery: a protein in the cell membrane of cancers that inhibits the body’s immune system, allowing the cancer to proliferate undisturbed. This membrane protein protects the cancers by disabling Natural Killer cells (NKs), the white blood cells that are responsible for attacking tumors and viruses. While such proteins were known to exist in the nucleus and cytoplasms, their detection in the cell membranes is novel.

According to Porgador, these membrane proteins could provide a target for new treatments.

“This is the real proof that a very important protein in the cancer life, or in the proliferating cell life, has a version that goes in the membrane,” he said, “and this protein could be a target.”

Using mouse cells, Porgador and his team were able to develop an antidote to the inhibiting proteins in the form of an antibody. Now, they are in the process of turning the mouse antibody into one that will work on human cells. Their goal? A fully FDA-approved form of cancer therapy that will be administered intravenously or intramuscularly to patients.

The ongoing research and development is led by Pink Bio-pharma, a company established by biotech incubator FutuRx. Funded by the Israel Innovation Authority, FutuRx scouts out and licenses academic research projects that could result in practical medical treatments. Porgador has been conducting his research with the Shraga Segal department of microbiology, immunology and genetics within the Faculty of Health Sciences at Ben-Gurion University, and the National Institute of Biotechnology in the Negev (NIBN).

After evaluating Porgador’s research, FutuRx decided to take it on. “When NIBN approached the FutuRx Incubator and offered them this project, this project was tested, checked by the scientific advisory board of the FutuRX incubator,” said Pink Bio-pharma CEO Dr. Rachel Eren. “The scientific advisory board found a lot of merit in it and suggested it to the incubator to start a company that could take this project and commercialize it.”

Osnat Ohne, CEO of the NIBN, said that the establishment of Pink Bio-pharma exemplified the goals of NIBN as a research institution.

“Pink Bio-pharma is a great example of fulfilling our mission of final commercialization,” Ohne said. “The professional team of FutuRx, identified both scientific rationale and applied research maturity and decided to establish a company based on our technology. We are very satisfied that professional accelerator such as FutuRx will lead the development of this promising project further.”

According to Eren, Porgador’s research has offered a valuable new method for treating cancer because of its focus on the Natural Killer cells.

“This [receptor] that Prof. Porgador has researched is a very novel concept, because it’s not on T-cells but on Natural Killer cells,” Eren said. T-cells in the immune system need a special activation to fight invaders, whereas the Natural Killers do not.

“So this is a very promising therapeutic approach,” Eren said.

Porgador noted that the current immune system therapies for cancer have not yet been totally successful.

“This is a very expanding field,” he said. “However, it is not a magic bullet. It doesn’t work in all cases or in most cases. Additionally, new checkpoints should be discovered and manipulated.”

His research, he explained, focused on harnessing the intrinsic powers of the Natural Killer cells to better resist cancer.

“It is clear that you need today, in order to get the better immunotherapy approach, not just to activate the T-cells... but also to activate the innate part,” Porgador said.

Although the study was published just a few weeks ago, Porgador is confident that his research will meet success in the scientific world. He sees his research eventually leading to a “complementary treatment” to the ones that already exist.

“I believe the paper will be accepted with enthusiasm, meaning a lot of citations in the future,” he said.