Monitor your metabolism on the phone with a single breath

Lumen breath-analysis device and app hacks your metabolism to give you actionable insights on food choices for fitness or weight loss. 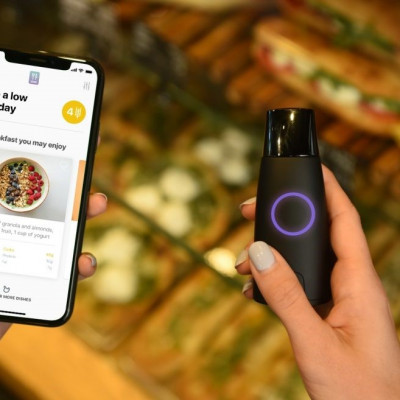 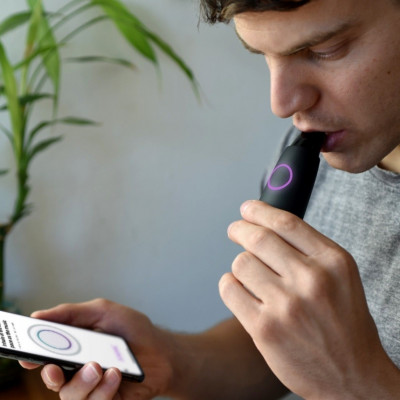 The Lumen device and app monitor your metabolism through breath

Identical twins Michal and Merav Mor have more than looks in common: both earned PhDs in physiology at Ben-Gurion University, both compete in triathlons, both are health researchers and mothers.

Wanting to manage their nutrition scientifically, the Mor sisters came across a metric called respiratory quotient (RQ), the ratio of carbon dioxide (CO2) to oxygen (O2) in the breath. Measuring RQ after sleeping, eating or working out reveals whether the body is producing energy from fat or carbohydrates.

Hospitals and clinics worldwide offer RQ measurement to help athletes adjust diet and activity for peak levels of fitness. However, the process involves sophisticated equipment, professional analysis of results and an hour’s worth of time – not something that could be done at home or on a daily basis.

Lumen, the company cofounded by the Mor sisters and three partners in January 2014, is launching a neat little device that works with an app to analyze breath within seconds and provide a personalized RQ along with suggestions to help you lose weight and optimize workouts.

When you wake up in the morning, you take Lumen out of its charging dock and remove its magnetic dust cap, open the app on your phone, and begin the two-step process guided by the app: Inhale a single breath with Lumen in your mouth, hold your breath until prompted and then exhale into the device.

In half a minute, you’ll know if you should plan a high-carb or low-carb day depending on your planned level of activity. Using machine learning, the device gets to know you better with repeated use, automatically. There’s no food tracking or guesswork involved.

“You may think you have a fast or slow metabolism, but it changes every day based on what you eat, how much you sleep and if you work out,” says Lumen cofounder and CPMO Dror Ceder.

“Your body is constantly producing energy from carbs or fat. Your fat storage can grow indefinitely, but your carbs storage – glycogen — which is mostly in your muscle tissue and liver, is quite small and can’t grow unless you work out and build muscle. When that storage is full your body prefers to use carbs, and when it’s depleted your body will burn fat.”

Because burning carbs produces more C02 than burning fat, the sensors inside Lumen measure the concentration of CO2 in your breath to reveal where your cells are sourcing their energy.

“Breath-analysis research is increasing hugely because there are a lot of biomarkers you can find through breath and it’s a noninvasive way to find out what’s going on in the body,” says Ceder. “But the technology is very complex.”

Lumen (the name signifies the way it illuminates what’s happening in your body) has several years of research, development and testing behind it.

The Mor sisters took their idea of a quick, at-home automated RQ test to Michal’s husband, Daniel Tal, and his business partners Dror Ceder and Avi Smila. The three entrepreneurs had worked together for 14 years. Their second startup, Wibiya, was sold to Conduit for $45 million in 2011. By the end of 2013 they were looking for their next challenge.

Ceder recalls with a laugh that they “naively jumped into” the Lumen project.

“We put in our own money and saw if we could crack it. What followed was a really tough year of blood, sweat and tears – literally, since we did so many finger pricks. But we did crack it. Then we brought in outside investors and filed the patents.”

Ceder says some other startups are testing a different breath biomarker to measure fat-burning but he does not see them as competitors. Firstly, Lumen researchers found issues with that particular biomarker, and secondly these companies don’t have the companion app with actionable insights, he claims.

Tweaked based on beta feedback

The Tel Aviv-based Lumen opened an office in New York and gave the beta device (designed by the Milan branch of industrial design house Frog) to more than 300 New Yorkers to try in September 2017, following initial validation studies completed at several prominent hospitals and universities.

“We are still iterating and will continue to do so for the life of the company,” Ceder tells ISRAEL21c.

Following an Indiegogo crowdfunding campaign whose $50,000 goal was far surpassed, breaking the $1 million mark, the company expects to start shipping Lumen in February (US) and March (international) 2019. Early adopters are getting Lumen for well below its $299 retail price.

Now that a tool will be available to the masses, how can users be encouraged to change their behavior based on the data it reveals?

“We took a lot of time and hundreds of beta users to see how to do that,” says Ceder. “The secret is not to change people’s lives completely but to create sustainable habit change that will last, discovering what is preventing them from reaching their goals and making it easy to follow the suggestions.”

“Everybody thinks their metabolism cannot be changed, but in fact it changes every day and you can control it. Once you know that, it really changes your life.”